By Zimbabwe Investor on August 8, 2013. No Comments 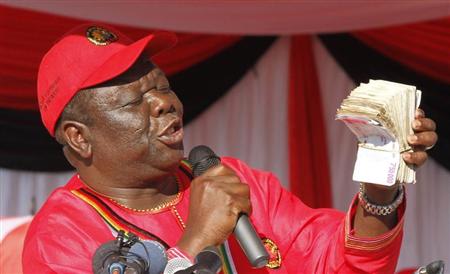 For a good part of his 33 years in power, Robert Mugabe has presided over a ruthless dictatorship. From the thousands killed in the 1980s Gukurahundi massacres and misery for millions under ESAP, Operation Murambatsvina and hyper-inflation of 2008.

Yet in the 31st July elections, endorsed by SADC and AU, the 89 year old ruler annihilated the hitherto iconic working class leader Morgan Tsvangirai and his MDC-T, who beat him in March 2008.

Mugabe got 61% to Tsvangirai’s 34%. Zanu PF won a 76% parliamentary majority, enough to re-write the new constitution and doing better than it did in 1980.

Wabi wedu wakawarairwa nezamu mu GNU vakangamwa vanhu. The working class is deeply pained by this tsunami, and many are tempted to go for the easy answer that MDC merely lost because of rigging.

That there was intimidation, an uneven terrain and some manipulation or rigging through the voters roll may be true, but the massive scale of the MDC’s defeat points to other and deeper reasons. To recover and move forward working people need to have an honest analysis to understand such factors.

An MDC defeat had become predictable. A poll in mid 2012 sponsored by American think-tank, Freedom House, showed a dramatic fall in MDC-T support from 38% to 19%, and that of Zanu PF rising from 17% to 31%.

The massive turn out in the Referendum in Zanu PF strongholds, huge Mugabe rallies and primary elections, all showed that Zanu PF had recovered and that its June 2008 Presidential Run-Off terror machinery was still intact.

Tsvangirai foolishly attacked the Vote Nos as “nhinhi” when they raised the issues of an unfair terrain, biased state media and judiciary, not realizing that Mugabe was using the Referendum as a dress rehearsal.

As Tsvangirai and his ministers were busy telling the world that they were lucky to be Mugabe’s apprentices, war veterans leader Jabulani Sibanda camped for a year in Masvingo terrorizing villagers. Then the MDC’s made a huge blunder in pushing for ward-based polling and counting of ballots.

This terribly exposed rural opposition voters to intimidation. With no protection from MDC and aware of June 2008, many rural people voted for their security. Unlike 2008 Zanu PF came into this election as a cohesive unit around its “bhora mughedi” theme.

Zanu PF had its most democratic primary elections ever, resulting in popular local candidates running, many of whom, small capitalists who had been on the ground sponsoring local projects.

Tsvangirai blundered by protecting unpopular incumbents, of up to three terms but hardly visible in their constituencies. MDC wrongly assumed that the 2008 protest vote, which was driven by economic melt-down would continue.

Tsvangirai’s own sex scandals and the corruption of MDC-run councils did not help.

Tendai Biti’s “We eat what we hunt” has eaten the MDC!

But there were deeper reasons for the defeat, reasons for which the MDC leadership must assume primary responsibility. Firstly, with total economic collapse in 2008, MDC saved Zanu PF from certain oblivion by agreeing to join a GNU in which the security apparatus of the dictatorship was left intact, whilst MDC was imposed with the burden of recovering the economy.

This despite, Joseph Mutero’s Mutongi Gava Maenzanise’s warning to Munhu (man) that it is foolish to save a caged and hungry Ingwe – a leopard never changes its spots- tomorrow it will eat you. The main mistake though was not just in joining such an ill-balanced GNU, but rather what MDC did once it got into government.

In charge of the economic and social ministries, MDC, led by Finance Minister Tendai Biti launched a fanatic IMF-inspired neoliberal offensive to kick-start the collapsed economy, which Biti dubbed – “We eat what we hunt.”

Its central elements included: slashing of all quasi-fiscal subsidies to the poor, wage freezes for civil servants and starvation wages for other workers; rigid adherence to the US dollar without safeguards for the poor, keeping inflation below 5%, cash-budgeting and attacking unions.

Whilst Biti was being lauded by the West as “the best Finance minister in Africa,” the austerity knife was piercing deepest into the hearts of the rural poor through: GMB going for over a year without paying for maize delivered, dying cattle because of lack of dipping facilities, an end to the maize seeds, fertilizer and relief food previously given by Western NGOs and the Reserve Bank, thousands of pupils failing to write examinations, clinics without nurses even as 2000 nurses were jobless due to a job freeze and MDC Minister Madzore even trying to export them!

Even as Biti pleaded lack of money, especially diamond money, the truth was that state monthly revenue shot from $60 million in 2009 to $250 million by 2013 and he had received a special IMF bonus of half a billion dollars.

Whilst berating civil servants that money does not grow on trees, Biti showered MPs with $15 000 bonuses, luxury cars and endless foreign trips for ministers, Tsvangirai and Mugabe.

Whilst benefiting from these policies, Mugabe strategically brilliantly re-positioned his party left-ward, around land, indeginisation, economic empowerment and African nationalism.

Such re-orientation had also saved him from the 1990s revolts. Mugabe and his ministers, using diamonds money and proceeds from indeginisation, dished out seeds, fertilizer, food to rural farmers, recognized informal miners, the informal sector, gave out urban housing stands and projects for youths and women.

They vigorously courted the independent African churches, Vapostori and ran an anti-West anti-sanctions campaign. On the eve of elections Minister Chombo announced a hugely popular cancellation of council debts which was denounced by MDC.

As agriculture recovered driven by 80 000 new tobacco farmers who in 2013 produced 164 million kg worth over $600 million, Zanu PF’s rural base soared nation-wide but especially the agriculturally-rich Mashonaland belt, just as that of Tsvangirai and MDC massively shrunk.

It is therefore not surprising that the defining character of these elections is that the rural voters, across the country have rejected and abandoned Tsvangirai and the MDCs. Zanu PF’s 40% strong showing in the towns shows that many urban poor are following.

As in Kenya and Zambia where rising African nationalism triumphed, and the anti-neoliberal revolts across the world, the rural poor rejected MDC as the party most closely identified with austerity and western puppetry.

In the absence of a major left radical alternative, this has meant voting for an odious repressive regime, but one that was forced to make radical nationalist concessions to the masses to survive.

In our February 2001 ISO Nyanga document to the MDC National Council, we had warned that unless the party embraced land reform, renounced the neoliberal ideology fostered on it by its new western friends, and returned to its working class base, it faced annihilation from a left-ward moving regime. We were booted out.

Interestingly today veteran united MDC leader Paul Themba Nyathi, said Zanu PF had beaten them fair and square because rural people had fallen back in love with Zanu PF for some unknown reason.

Coming from Matebeleland he is honest enough to admit that the main reasons for this disaster cannot be intimidation or rigging, for the people of Matebeleland even in the darkest days of death of Gukurahundi remained steadfast voting for persecuted ZAPU.

It becomes difficult to sustain rigging as the main reason when the pro-opposition western-funded local elections monitoring body ZESN, that had 7000 observers nation-wide, tells us that: “in 98% of polling stations there were no incidents of intimidation… at 98% of polling stations, no one attempted to intimidate or influence election officials during counting nor did anyone attempt to disrupt the counting process …and MDC-T agents signed the V-11 results form at 97% stations at which they were present,” which were subsequently posted outside polling stations.

No, my dear old friend Tendai, the Wananchi, as he likes to call them, meaning ordinary citizens in Swahili, are no fools. As in Kenya yesterday, today, here too, they have had their revenge.

Ma chefu e MDC akarara pabasa achinakirwa ne tea ku State House. The message from the elections is clear. For working people there is no future with MDC and Tsvangirai. Lacking a pro-poor ideology and strategy, it will not resurrect from this disaster. Even now, it runs to the very courts that gave it July 31.

Arnold Tsunga, who won Dangamvura despite Tsvangirai ordering him not to run, correctly argues that MDC must boycott all institutions arising from these elections, including parliament, if it truly believes they were a big fraud. Zanu PF already has a two thirds majority.

Participation or running to courts only legitimizes the regime. But a boycott is unlikely given that the party has no clear ideology and is now dominated by opportunists. For them its – zvangu zvanaka.

Yesterday’s workers leaders have become today’s poodles of the capitalists and bosses. Even today, against all Africa, it sings from the same hymn book as its masters in Washington and London, sucking their poisonous neoliberal juice, and hoping to precipitate economic crisis.

However, unless there is global recession, economic melt-down is unlikely. Whilst probably expecting a Mugabe victory, the West are stunned by his overwhelming landslide, and for now withhold recognition to send a message to Mugabe not to dare pursue the aggressive nationalist agenda he promised in the elections.

With survival guaranteed, Mugabe will still pursue his vote-catching nationalist agenda, but will likely moderate and strike some compromise with banks, big business and the West to avert an open strike by the capitalists and West that may bring down the economy. He is likely to pursue an agriculture-mining-tourism-anchored economic growth agenda geared towards China, India, Russia and Brazil.

With an eye to 2018, Zanu PF will continue with its empowerment agenda to eat away at MDC’s still-holding urban strongholds. Without the necessary ideological, strategic and leadership overhaul, MDC cannot counter this, and will suffer gradual terminal decline.

Also without a radical left alternative emerging, the danger deepens of the working classes continuing to fall into the hands of a repressive bourgeois nationalist dictatorship that only opportunistically sings their song, and with its survival guaranteed, will sooner or later, as it has done in the past, attack the poor, rural and urban, in the service of the system that it ultimately serves, that is capitalism.

The way forward for working people is to break from MDC and lay now the foundations for a new working people’s movement to continue the struggle against the regime. A movement that does not replicate MDC’s right-wing ideological bankruptcy but positions itself left of Zanu PF on an anti-capitalist, democratic and internationalist basis.

Such a movement has to be built slowly and organically from the struggles of workers and the poor, from the bottom to the top and anchored around the newly radicalizing trade unions and social movements. It cannot be built or decreed from boardrooms or mere anti-Mugabe sentiment or the same ideology as MDC.

But one that will not only fight for political democracy, but also the full expropriation of mines, banks, big businesses and big farms now under new black exploiters and place these under democratic control of workers and rural farmers for the benefit of all, as part of a regional and international struggle to smash capitalism and build socialism. ALUTA!